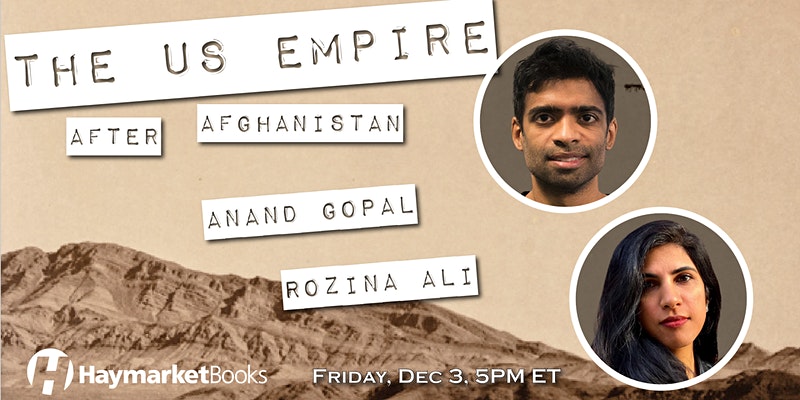 The US Empire After Afghanistan

Join renowned journalists Rozina Ali and Anand Gopal for a discussion of the aftermath of the Afghanistan withdrawal and the US empire.

Following the official U.S. withdrawal from Afghanistan in August, questions remain about the fate of the country following the twenty-year US occupation. What will happen to the 3.6 million Afghans that have fled their homes since the withdrawal? Or the twenty-three million in the country now threatened with starvation and famine because of US Sanctions? Is the war still being fought in more insidious ways that are harder to see and harder to resist?

Join renowned journalists Rozina Ali and Anand Gopal as they discussion all this and more on Friday Dec 3rd at 5PM on the Haymarket Youtube channel.

***Register through Eventbrite to receive a link to the video conference on the day of the event. This event will also be recorded and live captioning will be provided.***

Rozina Ali is a contributing writer at New York Times Magazine and a fellow at Type Media Center. Her writing covers the War on Terror, Islamophobia, and the Middle East and South Asia. She was previously on the staff of The New Yorker and The Cairo Review of Global Affairs. She is currently working on a book about the history of Islamophobia in the United States.

Anand Gopal is a freelance journalist covering Afghanistan, Egypt, Syria, and other international hotspots. He is the author of the Pulitzer Prize nominated No Good Men Among the Living, and is currently working on a book about the Arab revolutions.